(3) AIFEM developers conduct in-depth surveys on the requirements and habits of engineers to optimize the usage process, database storage, and data statistics and analysis and reduce repetitive work as much as possible.

AIFEM provides a complete and clear simulation process from geometric model import, meshing, and solution setup to post-processing and visualization. The entire process is completed on one GUI without frequent page switching. Solution setup is tailored based on the working habits of design and simulation engineers. This way, engineers can smoothly define material attributes, cross section attributes, analysis types, load, and boundary conditions, formulate computing solutions, and monitor the computing process in AIFEM. Users need only to set the required parameters. AIFEM automatically proceeds with all the subsequent simulation operations. This process makes AIFEM friendly to design and simulation engineers. 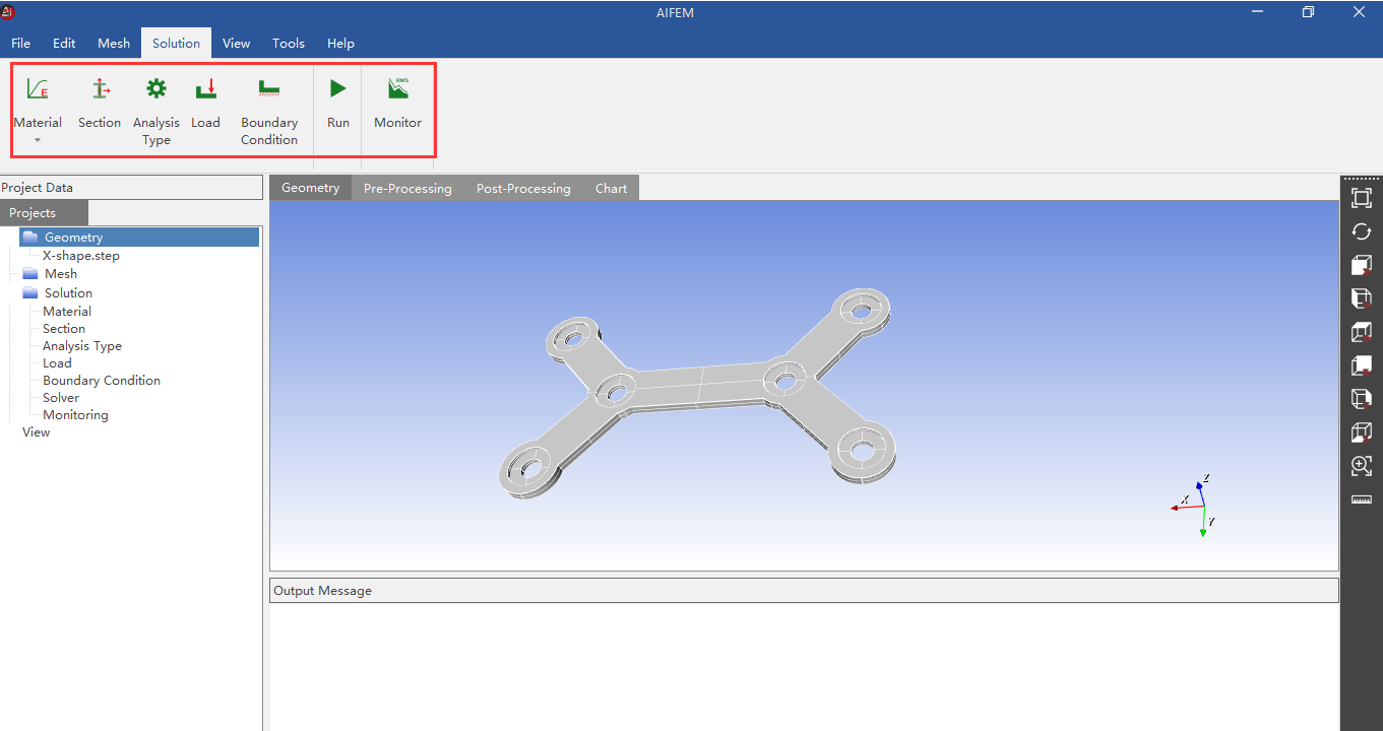 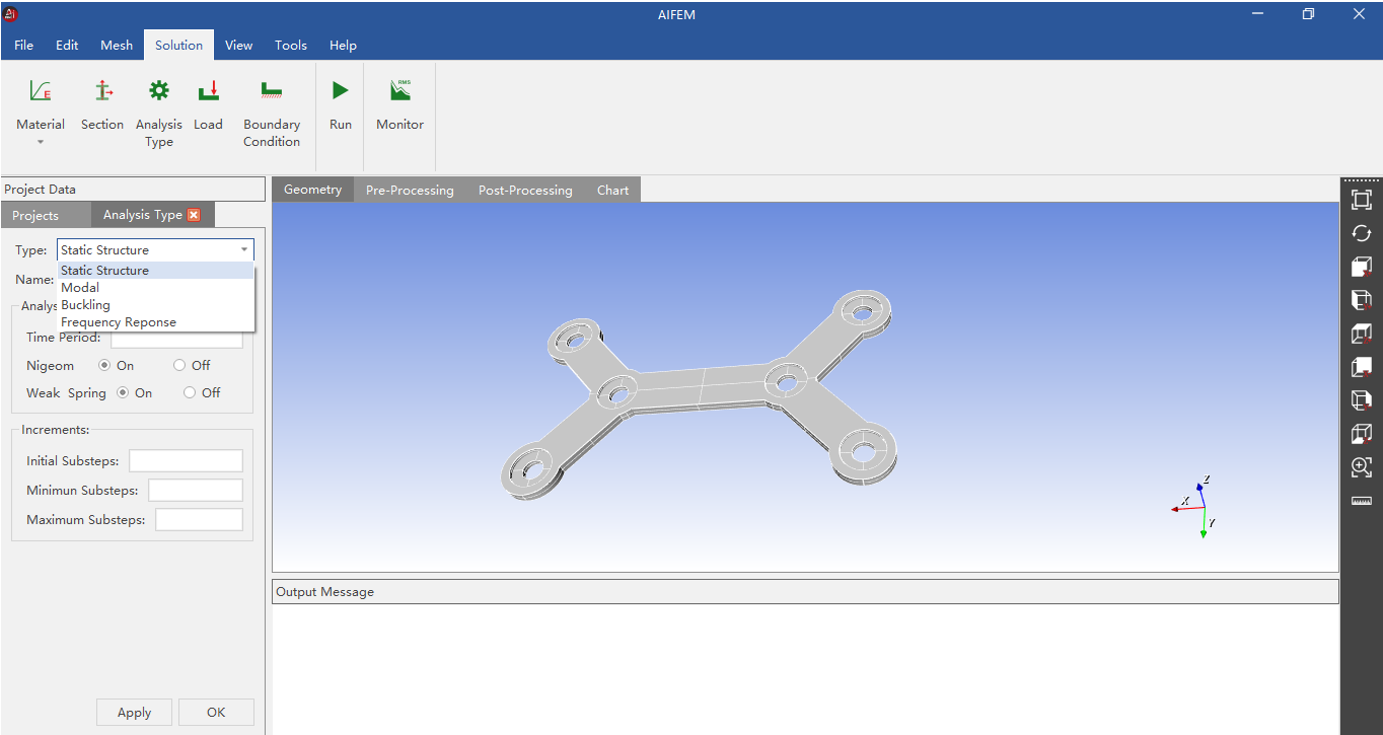 AIFEM allows you to import various formats of existing 3D models on the market and also finite element models that are already meshed by other commercial software. This facilitates refined simulation and eliminates the issues caused by subsequent mesh distortion.

During automatic meshing, AIFEM adjusts the mesh density based on the curvature and minimum geometrical dimensions. In addition, AIFEM supports mesh quality checks. For example, you can check the aspect ratio, warpage, collapse ratio, and minimum edge.

AIFEM can be used in various industrial fields, such as aeronautics and aerospace, maritime, energy and power, and automobile industries. The script language embedded in AIFEM allows you to further develop and customize the software, thereby ensuring high scalability.

AIFEM provides a client-based GUI and supports parallel CPUs to meet complex and heavyweight FEA requirements. Both Windows and Linux versions of AIFEM are available.

The dimension of the 3D rectangular solid model is (L, W, H) = (20, 4, 16). The torque applied to one end of the rectangle is My = 2.048e3. Other edges are fixed. Hexahedral elements are used. The following line charts show the comparison between the computational result obtained by using AIFEM and the theoretical analysis data. Theoretical analysis methods are used to calculate the displacement of each node and the stress at the element center. The stress value calculated by using AIFEM is the average stress value of all elements.

The following table compares the theoretical analysis data and the results computed by AIFEM using a coarse mesh and a fine mesh, in terms of the vibration frequency of the first, second, and third mode shapes.

The geometry is a cylindrical surface. The dimension of the cylinder is (R, H, T) = (80, 50, 2.5). No axial displacement exists at the two edges in the height direction. Triangular elements in the cylindrical coordinate system are used. 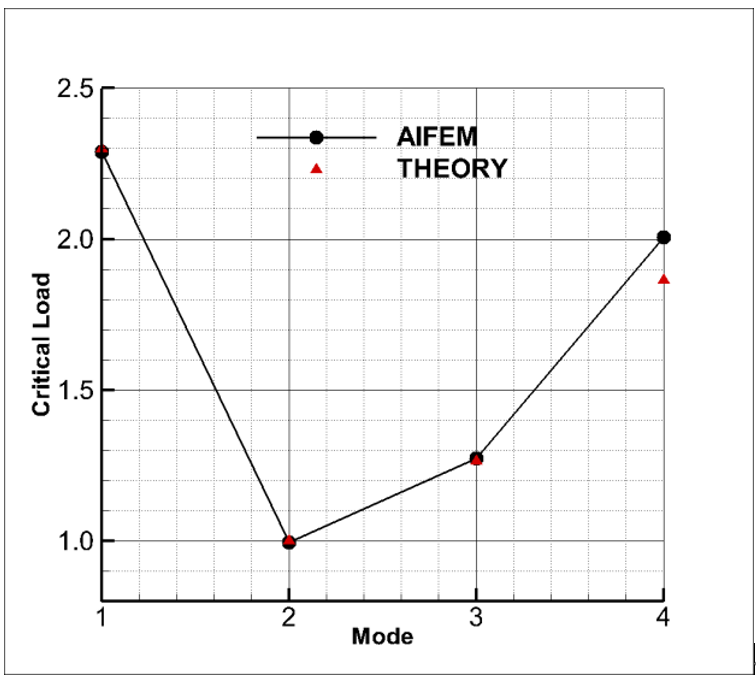 (5) Harmonic response analysis of a propeller

A simplified propeller blade model is built based on the geometries of the middle surfaces of the blade and disc. The frequency of the unsteady aerodynamic load is 133.3 Hz. Triangular elements in the cylindrical coordinate system are used. 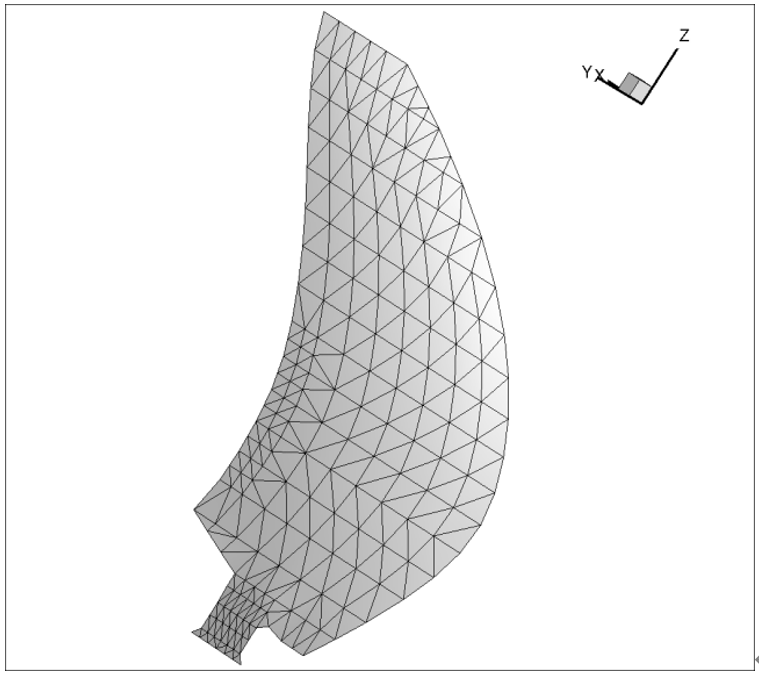 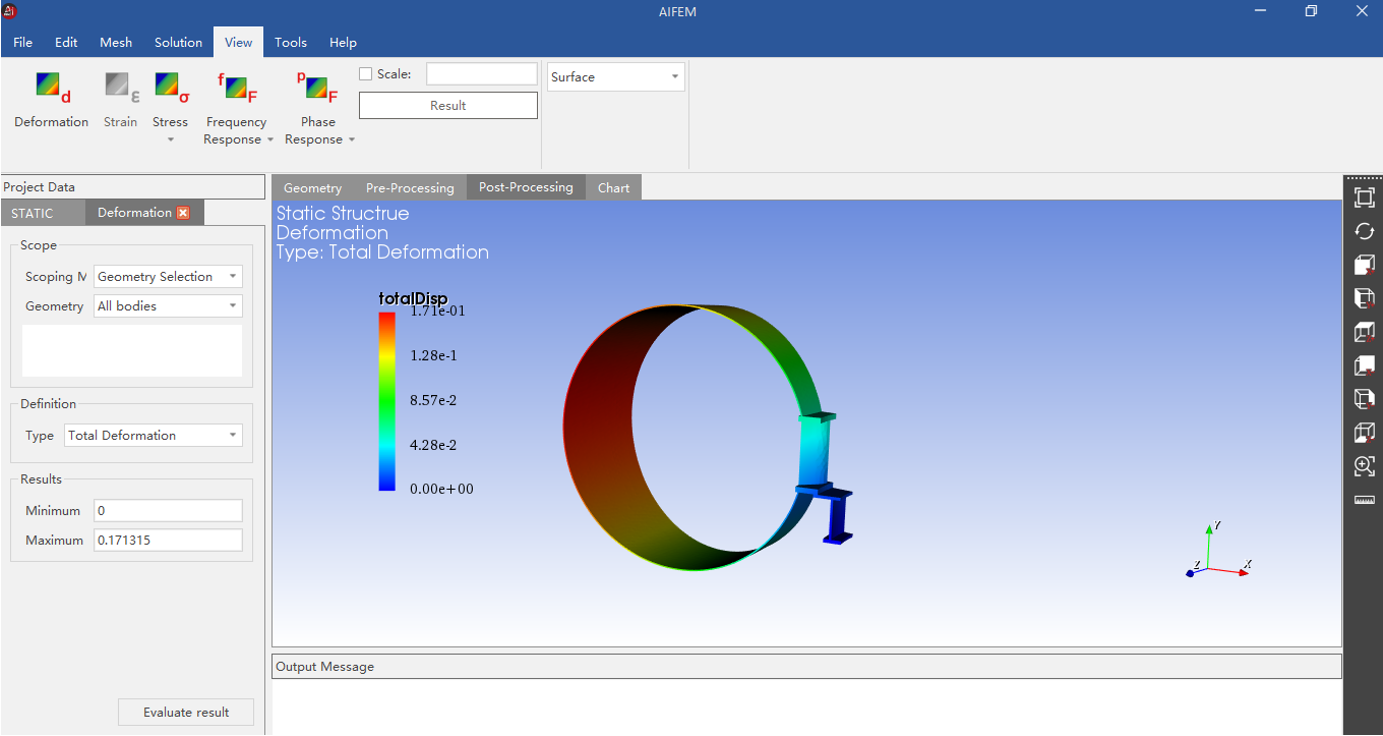 (2) Simulation analysis of a fan 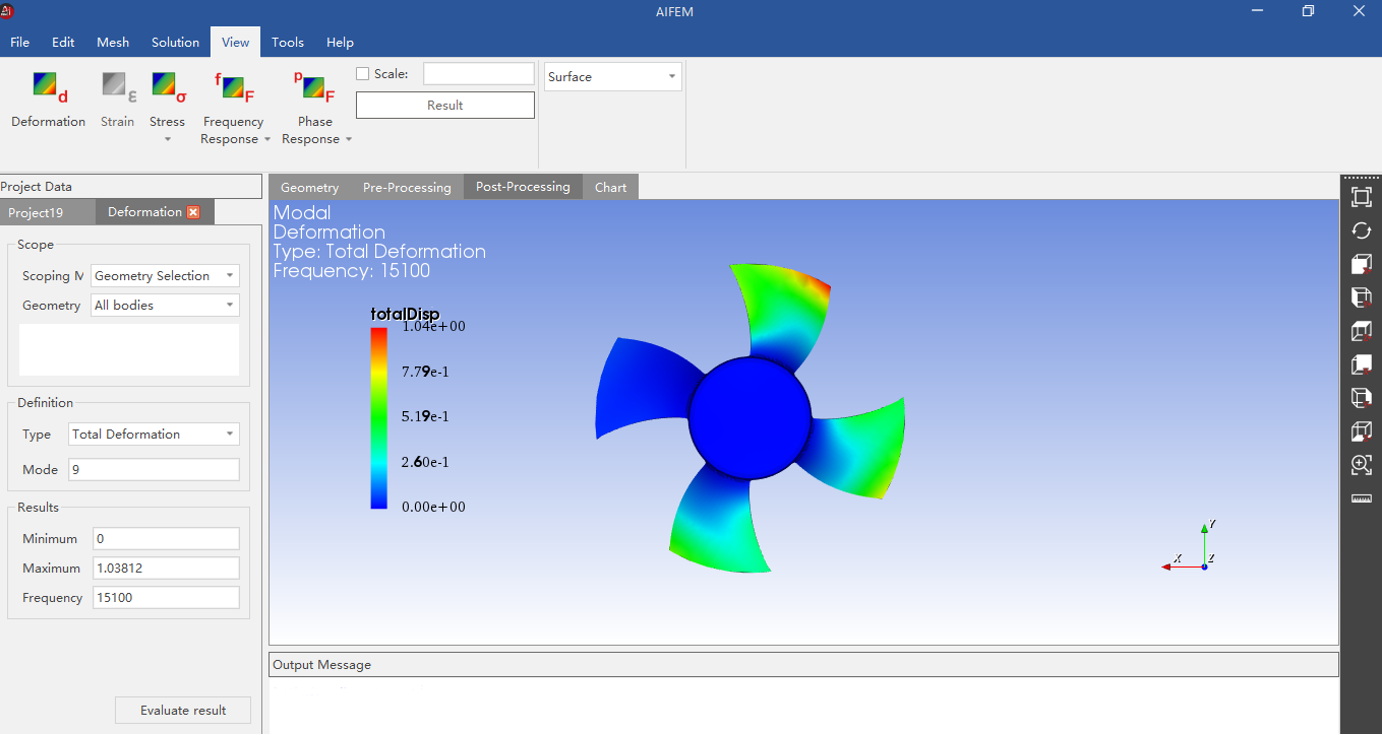 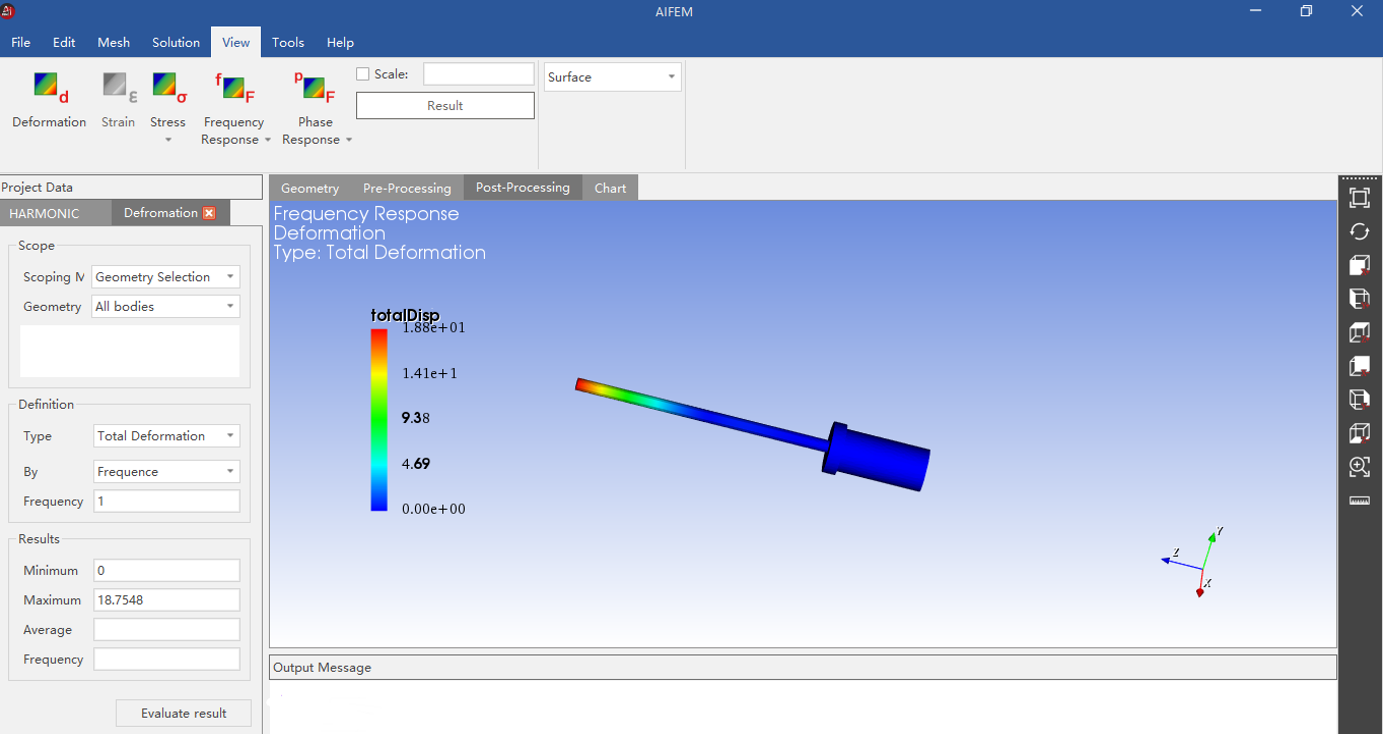 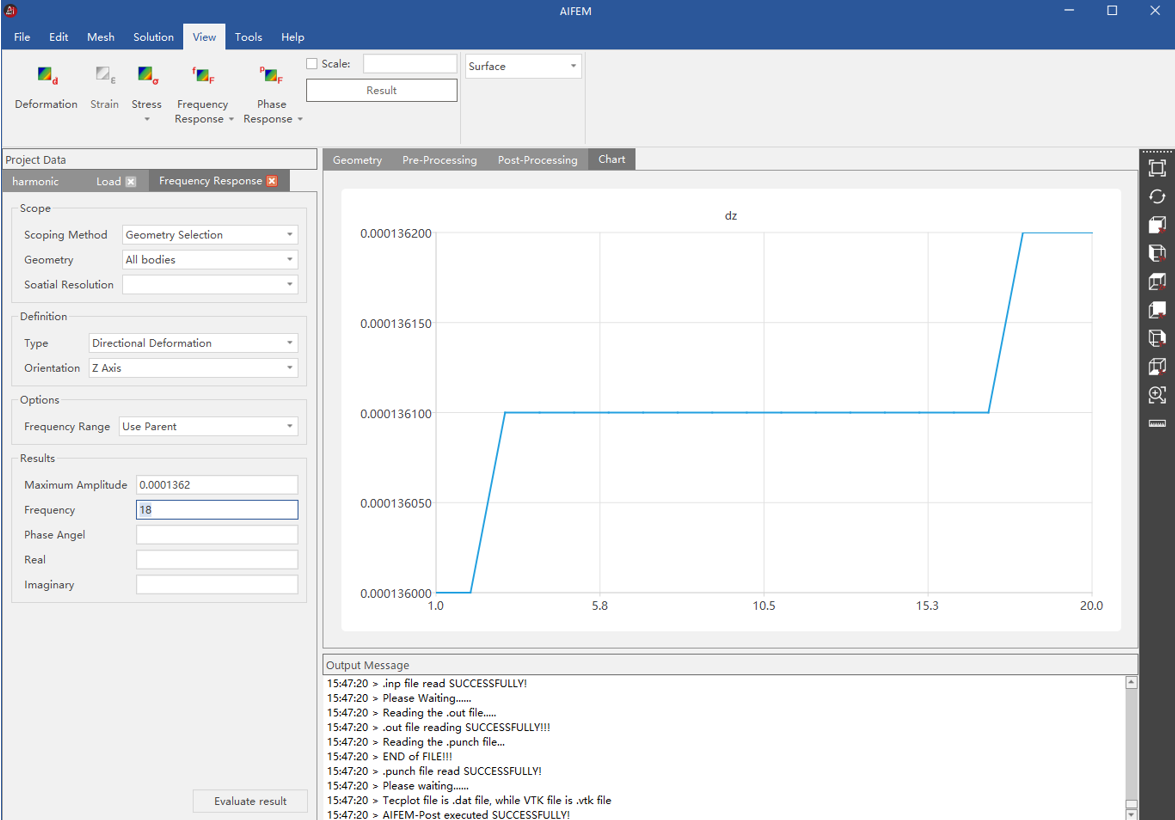 (4) Buckling analysis of a ring-pull can 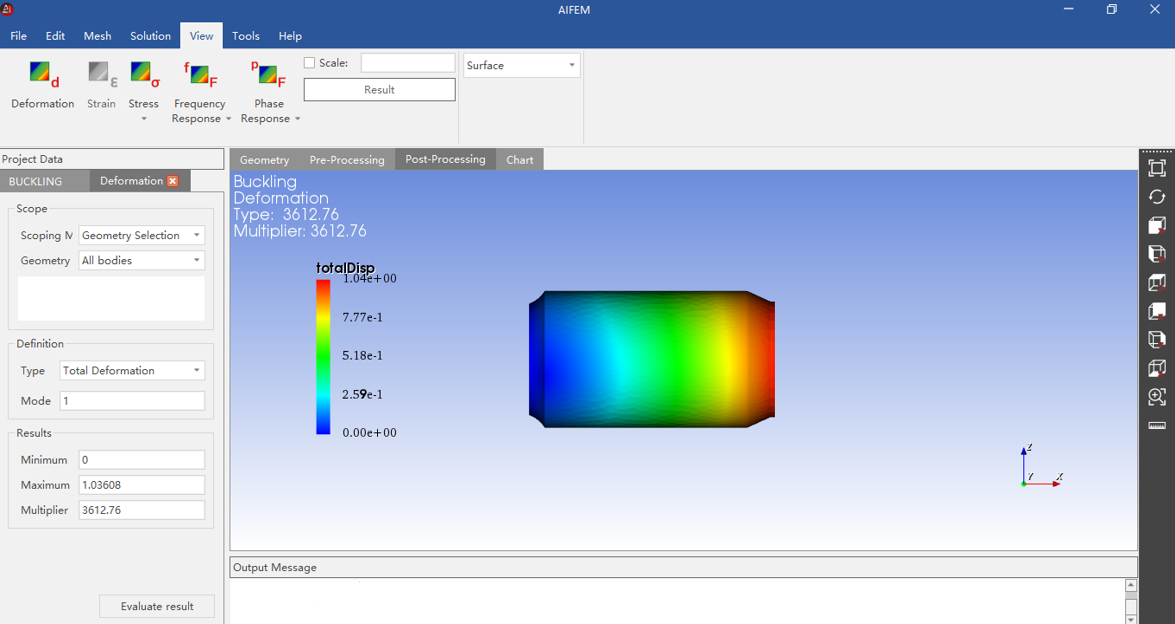